Please note: This blog will inevitably contain names and numbers which are in all likelihood not related to the case. I include all identified numbers for the sake of thoroughness. If you happen to be one of these names and wish your number removed, please feel free to contact me.

This series of posts will serve in part as a reference section. As such, it will be sterile of interpretation as much as possible, though I will add relevant details about names. As usual, I encourage any feedback, corrections or additional information.

For the most part, I have superimposed names of callers on these documents. Unidentified numbers are either left blank or marked ‘???’. In some cases a blank number is identified in the column on the right, for example on the GNR document, which I will begin with.

It is claimed frequently in the media that the McCanns called the GNR immediately, and they ‘took 40 minutes or more to arrive’. This couldn’t be further from the truth, as the following GNR document shows. While the Tapas group claimed to have gone to reception and called the GNR (Gerry, Russell or other depending on which account we read), they were in fact all in 5A arguing loudly until the GNR were called at – yes – 22:41. 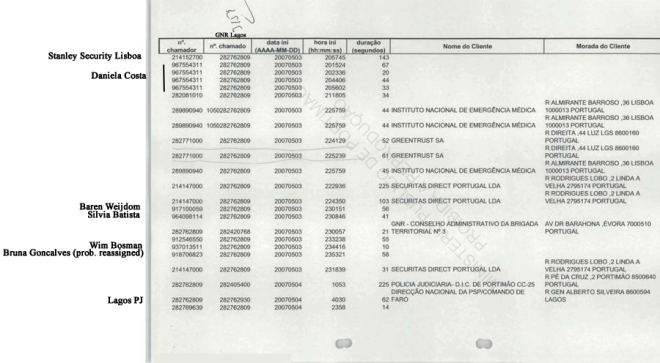 If you are unable to view the image well, please click here for better resolution.

The number ending ‘809’ is the GNR Lagos number, if the number is in the right hand column that means they RECEIVED the call, if it is on the left then they MADE the call.
Source

Calls above ‘Greentrust SA’ are all irrelevant – again, simply identified for the sake of being thorough. Taking these in order, then;

Instituto Nacional De Emergencia Medica – A call from the emergency services to the GNR.

Securitas Direct Portugal LDA – Alarm company – this would appear to be automatic dialling when alarms are tripped. There are earlier and later calls from here and it is more than likely likely irrelevant.
Source

Barend Weijdom – A Dutch property manager in Praia da Luz. He was interviewed by the PJ on the 16th of May. His interview appears to make no mention of his 23:01 call to the GNR, indeed he intimates that the GNR arrived ‘around 5 minutes’ after he was made aware of the search. The times he recalled were incorrect (stating events were unfolding at around 2145-2150). He claimed to have searched the beach area. Managed Apartment 5E (same block as McCanns, next door to the O’Brien/Tanner apartment). Unclear what other properties he was responsible for.
Source

Silvia Batista – Head of Maintenance and Services at Ocean Club. Interviewed at least four times, two of which were in May, and two in July. At no point does she mention calling the GNR, indeed she says she was ‘made aware’ of the situation at 2230, and GNR arrived after her. Silvia made interesting comments, such as corroborating the ‘praying Arabs’ pose of the parents, and her shock at them requesting a priest around 3am. Silvia later procured keys for apartments, in anticipation of Martin Grime’s work.
Source

Wim Bosman – A South African living in Praia da Luz, also having roots in nearby Odiaxere. I have found nothing relevant linking him to the night’s events, however he does appear to own the Dolphin restaurant with his wife. According to Lizelle Marais, Wim was out at a bar with her husband Adriaan when she heard about the events unfolding.

Bruna Goncalves – I have marked this number as likely reassigned, as the person it’s assigned to looks to be in her late teens at most. There is a precedent for reassigned numbers, for instance Robert Murat’s number is now assigned to an unrelated lady in Portugal.

PJ Portimao – As noted. For some reason, the ‘time’ column is incorrect from here and downward, so it is unclear if this call was at 1053 or 10 minutes past any hour after midnight.

In Part Two I will look at the Dolfino callbox, before tackling the lengthy Ocean Club call records.